Skip to the content
Exploring Greek Migration to the Berkshires 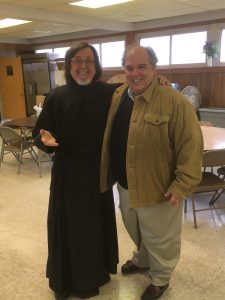 On the chilly evening of April 7th, 2018, Ryan and I ascended the steps of St. George’s Greek Orthodox Church, located in Pittsfield, Massachusetts. On the eve of the Greek Orthodox Easter, we were attending a service so as to introduce ourselves and our project. Hoping to enter quickly and quietly, we set foot through the front doors and were practically standing inside the back of the sanctuary.

The service had already begun, so we tiptoed to the nearest possible pew, unfortunately drawing some attention onto ourselves. As we sat down, I could feel my cheeks blush with the embarrassment of coming into a new place of worship, on the eve of Easter of all days, and making a small scene.

My embarrassment quickly subsided, however, as the service continued. I had never been in a Greek Orthodox church before and was truly entranced with the aesthetic and aroma of the building. As for the service itself, it was conducted both in English and Greek, a style of worship I had never witnessed. From my perspective as an outsider, it was an interesting and fascinating experience to be apart of.

After the service had ended, many different churchgoers, including the priest, came up and introduced themselves to us. We were invited to take part in their pre-Easter/post-worship meal. Recognizing that this was a perfect opportunity to meet Greek migrants and plan some oral history interviews, Ryan and I decided to stay for the meal. Besides, we did not want to be rude and decline their gracious invitation (plus, I skipped dinner earlier in the day and was beginning to feel the ill effects).

Once in the Church’s social hall, Ryan and I found an open table and seated ourselves. While we were discussing possible courses of action to take as to how to go about asking for interviews, Nicholas Geranios promptly came up and asked to sit. His warm and humorous demeanor acted as a beacon for, before I knew it, the table was fully seated with hungry churchgoers. Like we had known him for years, Nick began introducing us to the rest of the table and pointed out all of the Greek immigrants in the social hall.

After after talking with Nick for a while, who is Greek-American himself, the priest led Ryan and I around, introducing us/our project to multiple different Greek migrants. It was decided that Ryan and I would come back the following Sunday to conduct our oral histories during the Church’s coffee hour. As I left, with a box of pastries and a stomach full of delicious lamb, I hoped that Nick would be there during the coffee hour. In addition to his friendliness and comedic nature, I wanted to hear his experience growing up in the Greek community of Pittsfield.

As Ryan and I returned the following Sunday, I was delighted to find Nick at a table drinking coffee and making others laugh. He happily agreed to participate in the project and we sat down for the oral history. Much like with Mary, my first interviewee, I recorded a fascinating, intelligent, and thought-provoking story about Nick, a man influenced strongly by his father and the community he grew up in. The following paragraphs are a summary of the oral history interview, whereas the full recording and a transcription of the dialogue may be found at the bottom of this web page. 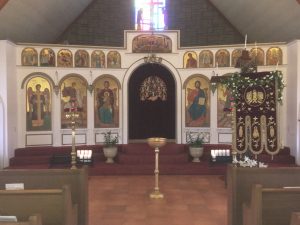 Nick spoke at great lengths about his father’s experiences and influence. His father, born in Greece, grew up during theGerman occupation during World War II. After experiencing the governments of a Greek monarchy and a wartime military takeover, Nick’s father learned to strongly value the democratic principles of the United States. Due to economic reasons,  Nick’s father immigrated to Montana and then moved to Pittsfield to be nearer to his wife’s family. While raising his own family, his father installed in Nick a sense of democratic duty, responsibility, and respect.

His father’s entrepreneurial spirit was another point of discussion. Joking, Nick commented that Greeks do two things: run diners and pizzerias, of which Nick’s family worked the latter. After laboring in the hotel business, both in Montana and Pittsfield, Nick’s father began to work in the food industry. He eventually earned enough money and knowledge to  own his own restaurant. Nick recalls his family’s hard work in running their pizzeria, which recently sold due to the death of Nick’s mother. To this day, Nick is still appreciative of his family’s sacrifices in creating an economically-comfortable childhood for him. Further, Nick believes that the economic autonomy of the Greek community was a large factor in their overall financial, cultural, and emotional success.

According to Nick, Pittsfield has changed drastically since his childhood. While growing up, there were many pockets of immigrant groups scattered throughout the city. General Electric was a large employer and the area was, generally speaking, economically prosperous. In addition, St. George’s was an important Greek cultural center. Greek villages have town centers where community members meet in the morning, afternoon, and evening to have some coffee and chat. Unsurprisingly, Nick reveals that Pittsfield is not setup to accommodate such a cultural tradition; therefore, St. George’s became the ‘town center’ for the Greek community. The Church was a warm and welcoming place, always acting as a resource for incoming Greek migrants, Nick recalls. 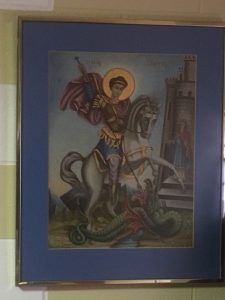 Nick explains that Pittsfield was home to a large Jewish-Greek population, as well. The  Greek Orthodox Church did not serve as a cultural center for all Greek immigrants for there were multiple Jewish synogogues in the area. Nevertheless, many of Nick’s childhood friends were Jewish and he fondly remembers going to his friends’ bar mitzvahs (now, he attends his friends’ children’s ceremonies). Nick describes how, in the past, a large five-day Pittsfield cultural celebration helped to foster relationships and knowledge between different cultures and religions.

Nowadays, the community is much different. General Electric has since shut down its manufacturing division, and, in part due to the joblessness and economic downturn, gangs and an opioid crisis have become Pittsfield’s new defining features. Regarding Pittsfield’s once prominent cultural diversity, for better or for worse, Nick describes a modern “blindness,” whereas the pockets of distinct cultural centers have since either left or been absorbed into mainstream American culture.

As for St. George’s, Nick told me it’s numbers are a fraction of what they once were. However, the St. George’s Greek Festival is still as vibrant and fun as ever, even if it is becoming harder to manage due to a dwindling number of volunteers. Due to the fact that all of the food is homemade, Nick enthusiastically recommends attending the summer festival.

Our last main topic of discussion was the migration narrative being delivered in the United States. Nick believes that European immigrants have an easier time becoming accepted into everyday American life, but that anti-immigration rhetoric is a danger for all. When asked about the best way to become successful in the U.S., like the Greek community in Pittsfield is, Nick recommends coming to the country legally so to have a safer environment in which to  live and raise a family. Further, he believes that hard work will eventually pay off, so persistence is a must for any new immigrant group. Overall, Nick believes most Americans are generous and accepting, so he (at the very least) believes that discrimination will remain low, if not completely non-existent.

Finally, Nick offers a suggestion to all Americans to remind ourselves of how lucky we are to live in a democratic, economically prosperous country which protects civil liberties and defends civil rights. Influenced by his father and the community he grew up in, Nick constantly reminds himself of the blessings the United States gave to his family. This was abundantly clear throughout the duration of our oral history interview.

I loved and appreciated being welcomed into the St. George’s community. Nick contributes a lot to the inviting and warm nature of their environment by making people smile, laugh, and feel at home. I very much appreciated his time, energy, and honesty while talking to me about a wide variety of subjects.  I look forward to visiting St. George’s Greek Orthodox Church again in the future so that I can catch up with Nick and talk with my new network of friends.

© 2022 Exploring Greek Migration to the Berkshires

Theme by Anders Noren — Up ↑