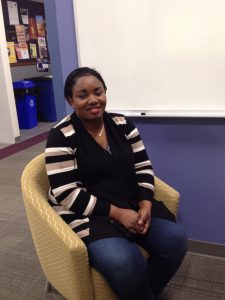 When Bobette Luvitu came to the United States, she was full of mixed feelings. “I was scared because it is a new country for me. It makes me, like, scare[d], nervous, and happy.” (7:03)

The journey had been long, more than 24 hours, to go from Kinshasa to her destination in the United States.

She quickly came to find that some aspects of life in the United States were pretty different. For example, owning a car:

Yet, there were other changes beyond the luxuries. When she arrived, she spent 10-hour days working a manufacturing job in Champaign, Illinois, a job that she describes as a “very, very hard job.” (3:28) However, many African immigrants who live in Champaign were able to help her adjust to the culture and her new way of life.

It was also in Champaign where she learned English. “I never [went] to English class,” She says. “I learned my English at home, watching TV… movies, like news.” (4:49)

Thanks to her English level and her experience as a general doctor in her country, she has taken a job as a medical interpreter for the Northeast Missouri Health Council.

“When I go to my appointment, usually they use the translate phone. For me, they never used the translate phone, so they know I can speak a little bit of English and my doctor appreciated that. She knows that I’m a doctor too… She asked me if I could work [as a] medical interpreter… I was very excited.” (12:43)

Overall, for Bobette, a mother of three, the changes have been worth it. From struggling with the culture and learning English, she has risen to up to not only have found a job that she loves, but also to be a vital tool for both Africans and Kirksvillians alike.

However, her country is currently facing social struggles of its own. Many children in her country don’t have money to pay for school or medicine. Because of the accessibility in the United States,  she wants her children to receive a good education and a good job, especially since here they have an “opportunity to study… to go far.”(17:23)

Right now, she is happy and thankful for her job, which allows her to help both the locals as well as the immigrants. Her position has been an example for other businesses who hope to include and integrate the Congolese immigrants.

“When I first came to the United States… everything was hard… I have some friends who help me with some English at home.”(2:36)

A new language is easily one of the biggest adjustments for any non-English speaking immigrant who has come to Kirksville, but besides the language, learning about what is culturally acceptable in the United States has been another hardship.

“The biggest problem is the system, the culture. We have a different culture.” (14:55) She goes on to describe that many local people might fear the African immigrant population because they have a tendency to speak very loudly. In reality, they are not angry at one another, but rather expressing themselves in the way that they best know.

She notes that it is also challenging to pray and go to church in the United States. She know many people that don’t go to church. However, she has found a church that now offers a Francophone service.

When the subject turns to what Kirksville can do to help the incoming immigrants, Bobette immediately brings up employment. “They help people who are very educated to find a job in their education…so help those people to learn English… Most of the people who come from Congo are very educated. They come and work at a warehouse… They just ask if they can find something who can help that. The United States can help them do that.”(11:36)

Not only would education-based jobs help the immigrants, but they would also aid in linguistic integration. “They help me sometimes… I know my English is not very very good. But they’re very patient with me, and they can help me to find the very good words. They help me to improve my English”(14:00). Excitedly, she adds, “I like my job. I like working with them!”(14:42)

She suggests that the community needs to make people more aware of the English classes that are offered by going to local churches, as well as Kraft and Farmland, to put up flyers written in French. Even outside of the workplace, however, just patiently trying to break the language barrier means a lot.

“I appreciate American people, how they are very nice beacause even though you don’t speak English, they make an effort to understand what you’re saying. “(11:18)

This brief quasi-journalistic summary does not due justice to the full depth of Bobette’s thoughts and experiences. Listen to her full interview below: