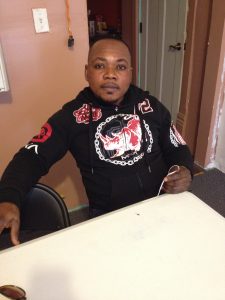 Coming from Ba Kongo, Congo Central, Ossok Kamavoko is no stranger to small town life. “Mbanza—Ngungu is like Kirksville, it’s not a big town.” (10:19) He says that he actually likes the small towns better “because you don’t have more… trouble with people… I don’t like a town where you can see many people, many problems.”(9:52) Although he is an ocean away from his home, he still remembers what life was like for him there.

The father of four kids, his wife stayed at home while he was the breadwinner for the family. “Their mom makes food for them, and does everything for them. That’s why she stays home… take care of kids.”(3:17)

Yet there were some financial problems. “In my country, I got a job but that job doesn’t make my life great because they pay me just a little money, and I cannot do everything in my life with that money.” (5:38) In an effort to be more financially stable, he decided to take advantage of the Diversity Visa system and come to the United States.

He started out in Champaign, Illinois. “I lived there three months. And I moved to Beardstown, Illinois, for one year five months before coming in Missouri.” (7:05) Unfortunately, his first job paid him only $7.75 an hour, which made it hard to make a living and still have money to send back to his family.  The result was him coming to Milan, Missouri to work at the Farmland-Smithfiled meat processing plant. “If you can come work here, you’re gonna make more money than here, now.” (8:23)

He also notes a difference between his home in Illinois and his current home in Milan. “In Illinois, I don’t see the farm like here, for the animals. But when I came to Missouri, I saw many parks with the beef and pork…It’s nice.” (9:05)

Although he’s been here for a few years by now, he still heeds the advice that his friend gave him upon arrival. “The first thing you [should] do, you buy a phone, because if you want to find a job, they want to call you or you can call the company…you may buy computer, because you can find job on the computer…you can learn to drive…you may learn English, because everywhere you go in America, you must speak English.” (11:59)

Heeding that advice has led him from his country to the hope of bringing his children here.

Due to problems in his country, it was not easy to make enough money to earn a living. “We have lot of problem,” he said, “The government doesn’t pay good money. That does not save the life of the Congolese people.” (6:31) Among the cost of living, he lists feeding his four children and paying for their schooling. That’s why he hopes that he can bring his children to the United states, where they can study and he can support them without sending money to the DRC. “I want to help my kids to be together with me here—maybe soon”(3:36).

He also considers his own future. “When my family come here, I want to improve my English more and maybe I want to change my job to go to school.” (18:08)

Although there is still much to strive for, some aspects of the United States are already better than before. In the DRC, “the law is for the simple people. The president, the government, there are exceptions.” (16:27) Yet, the freedom in the United States doesn’t draw such a line between simple people and the government. “Everyone is the same here in the United States, that I like… we can have different opinion, but everybody’s free… They don’t choose you are black, you are Spanish, you are African, you are American, no, the law is for everyone.”(15:34)

When he first arrived, one of the hardships that he first encountered wasn’t the language, but the weather.

“It was difficult for me because it was in November. Just beginning to snow. It was so cold, in 2013. It was so cold. In my country, all year, it’s like summer here.  And here, the first time I saw snow, I said, ‘What happened, my god!’ So that make me scared, but day by day, I try to live better… When summer came, it came like in Africa. You see everybody outside with the t-shirts and the shorts. That’s good.” (3:56)

In DRC, there are only two seasons: The rainy season and the dry season. Due to its Subsaharan location, heat is common, making the transition to Northeast Missouri (known for harsh winters) even harder.

Many immigrants want to move up to better jobs, but the language makes it hard—in more ways than one. Not only do more specialized jobs require a good grasp of English, but the job they are at now makes it hard for them to learn English. “We can speak English at our job, but we don’t have time. we’re working we’re speaking it’s not good because it can make injuries.”(26:01)

When asked about how the people in the area help him, Ossok replied, “I don’t see people come to help me.” (20:58) He added, “Every year or every month we have a new immigration people that coming in Milan and to Kirksville, and if the community can do something for the people… I know one family came here they got like 4 kids and parents—6 people—they don’t have house they don’t have food. Just the people who receive them buy everything for that family. But if we have a community here and people could go to the community and say, ‘I have six people at my house. How do I do with them?’ And the community said, ‘Okay, you can apply for medical… to receive some food, some clothes.” (21:30)

When he described the lack of help in the area, he made an exception for the ESL classes, “I received the help at the ESL school,” (21:02) but those classes are only once a week in Milan, and they do not provide the services that he wishes the community would provide. “Because the immigration people want, need to speak English. But if they don’t have any place to go to learn English, they will stay at [their] position.”(25:42) However, more people are needed to continue the classes in future years.

Finally, the cultural barrier also need to be addressed. “You can find people who can come help the immigration people or community… to show them how to live America, what you can do, what you cannot do. ” (26:20)

“I got a lot of friends…They got a lot of tickets from the police because they don’t know how you can drive, what speed. They see the pictures on the roads, they see, but I think to [remind] anytime, everytime, how to live in America, it will be better for the immigration people.” (26:45)

This brief quasi-journalistic summary does not due justice to the full depth of Ossok’s thoughts and experiences. Listen to his full interview below: