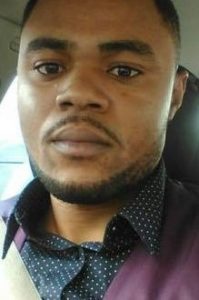 An immigrant from Kinshasa. Servais, 25, came to the United States in the beginning of 2016. He has gone from an eager English student to a certified CNA and a graduate from Job Corps in Ottumwa, Iowa. Although he has spent most of the past year and a half in Ottumwa, he was in Kirksville at the time of the interview. There, he hopes to find a new and better job.

Before coming to the United States, Servais was a nursing student at the university. “When I was [in] high school, I used to do science, biology. And I used to start college doing a nursing program, but I never ended… because we [were] about to travel to come over here.” (2:14)

Servais says that one of the big changes in the United States is the life of a student. “The difference back there—I never worked. I was going to school. I was depending to my parents.” (2:01) In his country, students up to college-level don’t work, but rather focus their time on studying. Here, even high-schoolers have jobs.

Another difference is the types of materials used for schooling. “There, I will say it’s a little bit harder than there. Over there, we don’t have lots of materials… like computers, internet.”(2:52)

Nevertheless, he did have the occasional opportunity to use the computer, so it wasn’t very difficult to adjust to a lifestyle where the computer seems to be the basis of everything.

“No, it wasn’t hard to use because I didn’t use this frequently… but I was to have access…but it was not frequently, like daily.”(3:40)

In the United States, in order to continue his education, he has attended Job Corps in Ottumwa, Iowa.

“Job Corps is a program that helps people who has some difficults of life. When I get here, me and my family were lost… we heard about this kind of program because they used to help people. It’s a program you can go to without paying any money.” (00:48) His younger brother and sister, both 21, also attended Job Corps, where they were able to learn English, earn their high school diplomas, and work on earning a specialized degree or certification. His youngest sister still attends school in the Kirksivlle R-3 school district. His mother stays at home and works at the Kraft-Heinz factory in Kirksville.

For now, “I used to work in Good Sam, back [in] Ottumwa,” (00:35) he says, referring to the Good Samaritan Society, a senior care home. “I used to live there… I went to Job Corps.” (00:39) For now, he says he will be taking some time off before furthering his education or getting a new job. Overall, however, he is thankful for the opportunities that the United States has given him and his family.

When asked about his first impression when he arrrived in the United States, he easily recalls the excitement. “My impression… I will say it was a dream. I used to dream that for a long time we go to live…somewhere else, out of Africa. I was excited. I was excited to make my dream [real].”(5:39)

In fact, he doesn’t even remember being shocked at any of the differences. “I was just excited, like, ‘I’m somewhere else.'” (6:07) Now that he is here and that he has finished his CNA certification, he is looking for things to be better.

“I hope thing [will] be better. I try to make my life more easy so right now I’m focused. …That’s why I have goals. I’m going to school just to change my life.” (10:10) His goals include finishing school and finding a better job.

As for his family, “We are determined. We are all going to school…After finish school, we have to work… with things that will be [our] trade.” (10:56)  His trade, for instance, is in the medical field.

Servais sees that some people aren’t as accepting of his people, nor do they have an understanding of his coutry and culture.

“Sometimes we don’t like the way some people try to treat us. I used to apply for job and when I go to my interview, and some tests to make them show I was in good health. One of the nurses said… ‘Those  kind of people have 50% to be good, 50% to be sick.'”(9:00)

Besides this, some common stereotypes of Africa have been hurtful to him. “Some of people ask us stupid questions, like ‘you guys live around animals, elephants?” (9:39)

He says that when people make such comments, “I don’t answer that question; I just try to be quiet.”(9:53)

When asked to name something else that is very hard about living here, he replies “It’s just the language… I want to speak much better than I do right now.” (12:17)

When it comes to helping each other, Servais turns to politics, both in his country and in the United States.

“We Congolese people—from here and back [in the] Congo—we are just crying about the political situation in our country. That’s why I want to talk about this; maybe my speech gonna be heard in the world. We want you guys to help us to [put] down this situation. To change things for our country, to make this be better. ” (13:00)

He goes on to describe the issue with Joseph Kabila, the current leader of Democratic Republic of Congo, who refuses to step down from his position as president.

“We have some kind of dictator, president, and his mandate is already done, but he won’t leave. He wants just to stay and lead the country. But [according to] the constitution, he don’t have the right to lead our country. That’s why we people are just trying to revolt, to be against this kind of stuff.” (13:46) As a result, there has been numerous outbreaks of unrest in Kinshasa as well as other parts of his country.

” My mother [was] winner of DV, but we… hear the United States government tried to end this kind of program… Some people, maybe their dream [is to win] this kind of stuff and come over here… I just ask [that] these things be continued.” (14:58)

This brief quasi-journalistic summary does not due justice to the full depth of Servais’ thoughts and experiences. Listen to his full interview below: